Is it safe to do that?

Recently I had a selection of aerial night photographs published in a number of newspapers, including the Daily Mail, Bolton News and Metro. For those who haven’t seen the article, here’s a link.

In the comments section of some of the papers, there have been a number of comments criticising me for taking pictures when I “should be flying the ‘plane” Apart from finding this insulting to my professional integrity, it makes me wonder what some of the general public think we are doing on a 4, 8, 12 hour flight? Do they think we are concentrating hard, hands gripping the wheel (or sidestick), staring intently at the instruments, ever vigilant in case something unexpected happens? This would actually be a very dangerous state of affairs. Fatigue would be, literally, a killer. So let me explain a bit more about my job, and the people who do it. 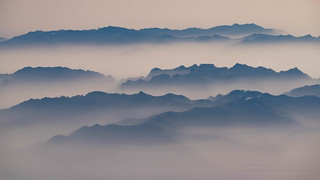 On any long flight, boredom is an ever present danger. The autopilot is flying the aircraft. One pilot is responsible for radio communication, the other for the operation of the aircraft. In the cruise, the pilot operating the aircraft, the Pilot Flying, might turn a knob every five minutes or so. The Pilot Monitoring answers calls from Air Traffic Control, switches frequency when instructed, and keeps an eye on what the other guy is doing. Both of them keep an eye on the weather radar if any weather is expected. Sporadic inputs into the flight management computer can be made by either pilot in the cruise. To pass the time, the pilots may converse. Some read newspapers or magazines. Several I know will do Sudoku or crosswords. The really keen, or new hires, read the manuals. When a member of the cabin crew enters the flight-deck, it’s often a welcome diversion from the mundane necessity of sitting next to a person you probably don’t know and have very little in common with except for the fact you do the same job. Some long flights will be during the time of day when the bodies natural rhythms tell it it’s time to sleep. Jetlag exacerbates this problem. When we are really tired, “controlled rest”, consisting of 20 minutes or so nap, is an accepted, and even encouraged, way of recharging your batteries (of course, only one pilot at a time!).

A lot of pilots take photographs; I am in no way exceptional in that. Perhaps I know more about photography and processing than a lot of my colleagues, and tend to use more expensive and capable equipment. Processing aerial images is a complicated procedure that most pilots can’t be bothered with, so they shoot jpeg, and accept that everything always has a blue cast and usually looks like it’s been shot through muddy water. So while the pics they take end up on Facebook or Instagram, mine end up on my website, in books, or, in this case, in newspapers. Taking pictures keeps me energised, while often my colleague will be flagging. I don’t use a camera at times of high workload, or during take-off or landing. The low level shots on my website are all taken either from the jump-seat, or as a passenger.

I have spent a lot of my flying career involved in training, both on the line and in a simulator. In my experience, attitudes and temperament of pilots range between two extremes; Technicians, and Artists. The Technician tends to know everything there is to know about the aircraft, can quote manuals, takes pride in doing everything exactly according to procedures. Technicians tend to get to top of climb at night and switch the storm light on, reducing the world to a couple of square metres of brightly lit panels, screens and knobs. The Artist is more of a romantic; he or she loves flight for the sake of it, treats the technical aspects of flying as an art, and loves the view. At night, the Artist likes the lights turned down a bit in cruise, so they can see the stars. They often have Sky Map on their mobile phone. They might take pictures. They will have plans for the time spent at the destination. They will get bored long after the Technician. In my training experience, flying ability is spread pretty evenly from one extreme to another. Technicians can often remember obscure snippets of information that suddenly become just what you need to get out of a situation. They can also be pedantic and autocratic. Artists can be laissez-faire on occassion. However, Artists are more likely to be able to think out of the box, and are more likely to be open to discussion on the best course of action. They generally tend to be less restrained by ego. They are less likely to sit there moaning about the company, which is not good for morale on a long flight. They accept the company’s rules and procedures, whereas the Technician, while following procedures to the letter, will often think small items in the SOP’s (Standard Operating Procedure) should be changed, and doesn’t mind telling everyone about it. They can be very boring.

The ideal pilot probably has elements of both. But when the shit hits the fan, and things are not going as expected, I know who I would rather be sharing the flight-deck with.

This entry was posted in Uncategorized.